Today’s Mantra: Love As Long As You Live

This week was awesome. Lots to Love.

We have a new super hero in the house. We’ve had Ben 10, The Wiggles, Spiderman, Mario and Luigi and now it’s….Jason Bourne.

Not heard of that kids show?

Well…it’s not really a kids show. You see the other night after another fantastic TV free day for the boys (I’m boasting cause it doesn’t happen that often) I wanted to watch the end of a movie.

Julian was playing with some toys but stopped when he heard the click of the TV. He jumped on the couch beside me and we snuggled. He was happy enough to lie there and didn’t complain that it wasn’t a “boys” show for once.

I didn’t think he was paying attention to “The Bourne Identity” until he told me it was his favourite movie. Daniel and I laughed and there was nothing violent going on at that stage so it was kind of cute.

I thought he’d fallen asleep when he said, “Is that man called Paris?”, Bourne was trying to piece together which assassin he was and said, “I’m Paris.”

I said no, that’s Jason Bourne, then there was a whole lot of eye covering as Bourne did what he does best, shoot people. 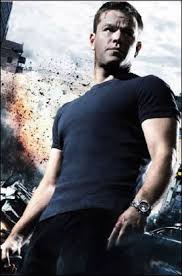 Um….so ever since then he’s asked to watch it (No!) and Daniel has been asked to tell “Jason Bourne” stories before bed. They’ve had baby-cino’s, gone to the park and The Beach-house (local softplay centre) together, just Julian and a trained assassin.

Kids and their imaginations….

Juices For The Whole Family

Leo takes his in a sippy cup (finally got sick of the mess from him drinking from my cup), Julian takes his with a straw and Daniel takes his on the way out to work in a glass bottle.

I thought they were just big burping cloths which was great for when he was little (to cover me) but no…I have just discovered the snaps on the back and ta da!

They cover nearly all of him! Genius. (If you are in Perth, Chica Gifts and Home sells them in Applecross).

I had a catch-up with girlfriends yesterday and we actually got to talk. The kids were all playing so well together (ie: only a few tears) and even Leo, when he woke up, was playing with them. I didn’t even realise how good they all were till they were gone and I realised I could remember whole conversations without interruption.

I don’t mind getting in photos. I don’t deliberately avoid them for any reason but it’s rare that I bother to get one of me and the kids.

The sentiment is right. The kids when they grow up will be dying to see pictures of us as we grow up with them…and it’s so hard to find candid photos of us all together. I guess more people will have to be bothered by that annoying question….”Excuse me…will you take a picture of us?”

I’ve been struggling to find a nice, relaxing Yoga class near me, at the right time (Bikram is not relaxing). A Living Social email came through via my hubby this week that had eight Yoga classes for $29, it was just round the corner from me and the classes are for a Saturday morning.

It was meant to be 🙂

I just love the way my dogs or children really get excited when I spend some one on one time with them, cuddling, being funny, kissing them. They seem to bloom under my attention. I get my love back in return with smiles of delight and sloppy kisses (or licks).

Have a great Friday!