It’s been out of action for quite some time due to a leaking battery but it’s back. Leo is noticing it for the first time and both kids are delighted on the hour when the bird sings and makes it’s appearance.

My kids are clowns, we had some really awesome times and we laughed a lot.

How cute is this! A Christmas present that has just arrived… 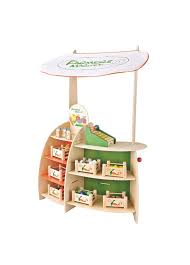 Julian has been playing shop and counting out the fruit and veg. It even comes with cute re-usable shopping bags!

It’s nearly the weekend but it feels like the week has just started due to a lovely public holiday Monday…a very nice way to end the last week before school starts!

It’s really giving me a sense of achievement…though I do seem to over-estimate the amount I can get done in one day.

But don’t we all?

How was your week?